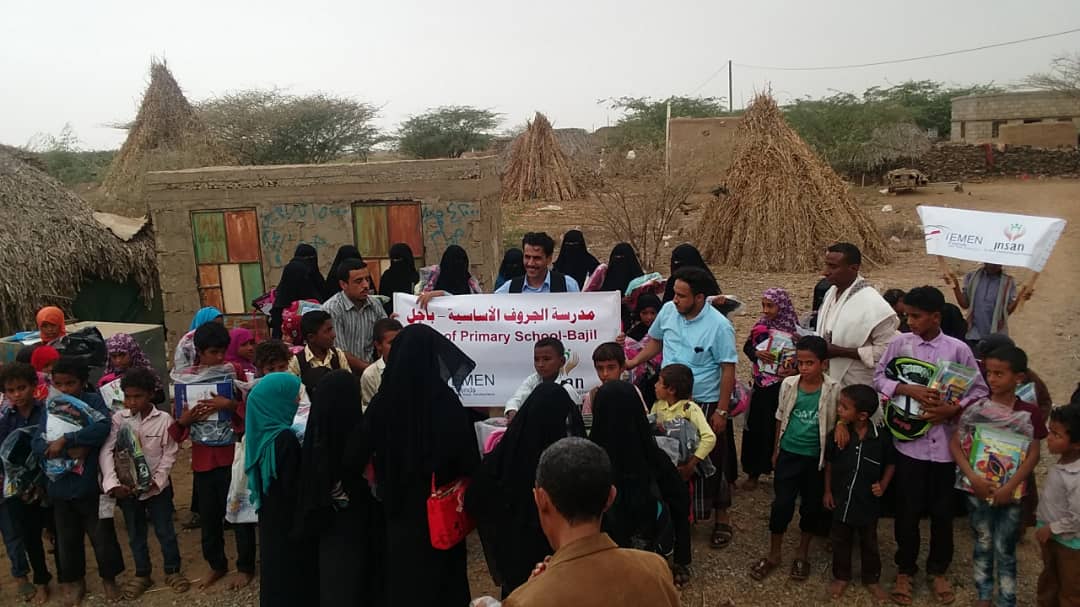 In Aljaroof, a remote village of Bajel district – Hodeida governorate, the villagers established a classroom for the school year 2018-19, which was officially authorized as a branch for a public school in the area. Sixty pupils aged 7-12 of the residents registered and joined after being deprived of education. The time pupils started holding their pens to study then, they had to study on the floor under a roof of straw and pillars of wood, holding their notebooks and pens in plastic nylon bags and, innocently, carrying them on their backs as school bags.

Since then and passing to the end of their second school year of 2019-20, no single body had looked back at them, nor had they found support from people around until a few days ago when God sent them Friends of Yemen who, indeed out-raced everyone, asking nothing from anyone, how? How much? Where from? All questions were tongue-tied in front of the surprise..!

What we remember was finding ourselves with the convoy of Yemen Friends seeking permission to land in front of the classroom door, not to promise giving something but to bestow everything! The convoy was not indeed empty handed but loaded with variety of stuff.

By the classroom door, stood the team of Yemen Friends; showing man’s greatness, time apologized to … place, and fell back the unthinkable! The mission of humanity, Yemen Friends, started for those classroom pupils. They dusted off the kids’ clothes with chairs and tables which filled the corners of the room. Darkness has been stripped away, and integrated source of solar power emerged- sparking the hope for a brightening future all over the class. The classroom front glimmered with the brightness of the whiteboard – replacing that shabby, gloomy piece of wood… Room corners and sides whispered to each other how posters and educational media were pinned on the walls… here and there. 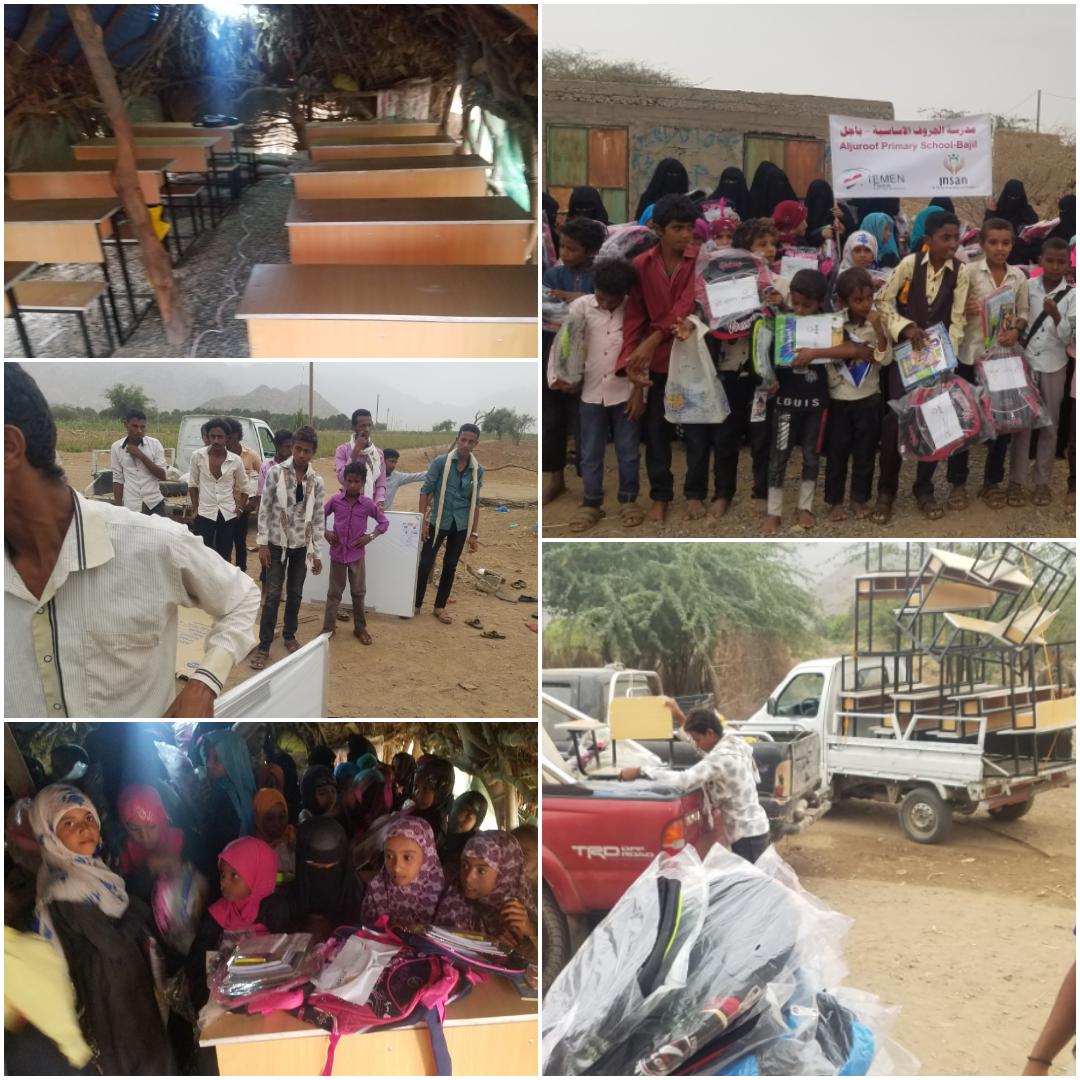 The mission did not stop – and the team of Yemen Friends did not abate holding by technology – so they surprised us with pinning a screen on the wall equipped with everything (as it is there in the private schools) for the pupil to study and gain knowledge to elevate them to the basic principles of the new era. YF transformed that classroom from the humble simplicity into modern complexity of the lecturing rooms.

The mission didn’t stop as tenderer didn’t stop tender! Yet, it exceeded to give the soft endowment to every student – to wipe off that misery represented in the plastic nylon bags off their shoulders. Each and every kid was given a school bag of which they have been dreaming: colorful and amazing in shapes. These bags were not empty! They were filled with different gifts of student’s needs i.e. notebooks, pens, sketchbooks educational books and others for painting and colouring. None of the kids has ever dreamt of such endowment even in their wildest dreams! But Friends of Yemen were being aware of (strong resolves come in proportion to men of determination). Any of the kids might have not been aware of the physical value of that endowment for Friends of Yemen, but innocently and spontaneously reflected that true moral value on their day-to-day life and their childish behaviours as they did not sleep that night of excessive happiness. They were glad carrying the school bags with beaming smiles. They were happy sitting on the chairs of which no one has sit on them before but them! It was even reflected upon the adults who were happy for the happiness of their kids.

Amidst the crowd and glory of joy at that time, the hand of Yemen Friends team member extends, secretly, to put YR 20.000 in the pocket of their head teacher – of which he counted later – and draw his hand back for the left hand not to feel it..!

Suddenly, the team of Yemen Friends seeks permission to leave the place waiting for no complements, mentioning or even thanks…! It all seemed to me as they reminded me of Prophet Moses when “So he watered (their flocks) for them; then he turned back to the shade” Holly Quran. That’s how the great are… They’re  giving their best.. not waiting for the rest. They left the place… not leaving in the heart..a space. Then they went away… remains showed their way… for the best.  Thank you Yemen Friends Team!

© Copyright 2016 by MyCompany
All rights reserved