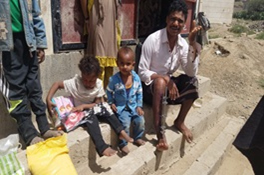 From Yemen: Stories of displacement, emigration and dangers of Covid 19. No hope in the horizon for the residents.

The war in Yemen displaced millions of citizens and pushed them to emigrate from their original homes located in the conflict areas. According to the UN office, five million and a half million citizens have been displaced from their homes.

„The story of Ahmad Ubaid and his family: Escape, emigration and terrifying dangers“

Ahmad Ubaid and his four-children and a wife (Ayoosh) used to live in Alfazah district in Hodeidah coastal city. He is one of thousands of people who have been forced to flee their homes at the heart of the conflict and to flee to safe zones.

Ahmad narrates the story of his emigration to Yemen Friends saying: „I had no other choice after the war augmented and the expansion of clashes between the gunmen beside our home but to wait and take the opportunity until the battles calmed down a little and then fled and ran away“. He continues, „I was in a state of extreme horror and anxiety that I did not believe I could survive and be able to leave our house and to leave to any safe area. Checkpoints set up by militants in many public streets, snipers occupy high buildings and shoot bystanders without checking their identity, and clashes are burning. But with praise of Allah, we survived and managed to escape from the city to Sanaa city. I started looking for a residence for me and my family, but I did not find. We sat up on the floor in a public area called Daris, north of Sanaa until one of the area residents looked down on me and gave me a one room store to live in with my family. He was a great man. He gave me a motorcycle to work on and feed my children. I learned to drive the motorcycle and started working on it for four months until I was hit by an accident that caused my right leg to break. I was brought to the hospital and I was there for ten days. I went out on the crutches. Now, I am suffering from injury and my family is hungry because of the disability. I became disabled. I am no longer able to go back to work by motorcycle.

And he continues. „Now, as you can see, we are threatened by the Corona virus in addition to war and hunger as we have no means of protection against infection such as face masks, sterilizers and detergents”. The story of Ahmad and his family with displacement is no different from the stories of many of the people who fled the war, as the suffering of those who fled the war does not stop when the original houses are lost and only the search for safe houses is sought. They also suffer from severe shortages of food and medicine and the inability to meet the most basic needs, especially under the limited care and assistance of international bodies for war-affected people, which has led many displaced people to beg or work in marginal, water-stressed occupations in public streets or clean up cars to meet basic needs. People struggle to live in a food crisis, the danger of the Corona pandemic and the risk of hospital closures due to the lack of fuel resulting from the blockade and war. Ahmad continued talking about the life of suffer and deprivation he lives in and said, “I possess no more stuff. Circumstances are hard and I face a tough life. I have not been able to find the most basic needs to live for me and my family. Hopes are missing in a continuous war.

© Copyright 2016 by MyCompany
All rights reserved